That was the question we asked when Ohio Brett, Dr. Sherri Tenpenny, and I sat down at a recent conference in Ohio.

We all know who is funding evil. George Soros and his army of Luciferians, BLM, which has raised over $1 BILLION, and a long list of others who are hell-bent on destroying all things good. Perhaps you could name a few of the culprits on your own.

Does anyone remember when the former Muslim-in-Chief said this?

“We cannot continue to rely on our military in order to achieve the national security objectives we’ve set. We’ve got to have a civilian national security force that’s just as powerful, just as strong, just as well-funded,” Barack Obama said in July 2, 2008.

It appears that his team has been very successful in its mission. Over the past couple of years. we have witnessed this “army” as the ravaged the streets of Minneapolis, Milwaukee, Portland, and a myriad of other cities all across America.

We witnessed the burning of many American cities by a bevy of bussed-in BLM and Antifa-funded punks. We watched a well-funded caravan of interlopers pour across America’s southern border. We watched aghast as long-standing statues of America’s historical figures were toppled in the same manner that we witnessed in Communist countries all across the Eastern world.

Obama and his Communist buds unleashed hell on America in an effort to turn America into Cuba. Obama’s “just as well funded” army attacked everything good and now stands on the cusp of overthrowing our once cherished American Way.

Who is standing up against that Luciferian Army? Our government has been seized. Christians are no longer in charge of ANY of our National Institutions. Education? Entertainment? Medicine? Media? Christians have relinquished control of every one of the cultural-impacting institutions. We don’t even control the CHURCHES anymore! 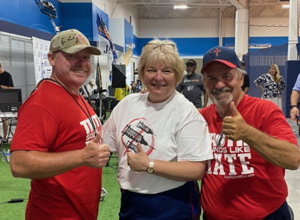 This brings us back to the original question. Who is standing up for what is right? WHO IS FUNDING GOOD?

A month ago in Buffalo, NY, we launched TheChristianRevolution.net. Please take a moment and visit the website.

We are looking for 1 million Americans to donate $100 to begin the process of fighting back against the forces of darkness. We are going to use the funds to fight for everyday moms and pops who face the danger of losing their livelihoods simply because they believe in “my body-my choice” in regards to medical decisions. We want to hire attorneys to fight for Drs, Nurses, firefighters, police officers, military, and others who do not have the money to hire attorneys. We want to fight for the MILLIONS of precious children in our government schools who are being forced to wear useless dog muzzles.

We have already hired attorneys that are filing lawsuits even as you read this.

Please visit our website. Check out our plans. We ask you to help us fight back. Pray, give, and share the story. Your donations are NOT tax-deductible. We are tired of asking the government’s permission to do what our Constitution clearly permits.

Now is the time for The Christian Revolution.

Help us overcome evil by fighting for good. This may be the final opportunity for Christians to fight back!

We think this nation is worth fighting for. Please join us in the battle.