What Else Have They Lied About?

“There is no honor amongst thieves.”

I’m not sure with whom this phrase originated with but it is on full display in America today.  Our government is a collection of thieves.  They have robbed every vestige of Truth from the American people and have smiled while doing it.

Take a good look at this picture of Robert Mueller, John Brennan, and James Clapper.  It is enough to make a strong stomach vomit.  In case you wondered, this is a picture of three men who attempted to over-throw the American government.  One investigated the other two.  Can you tell from the picture who investigated whom? 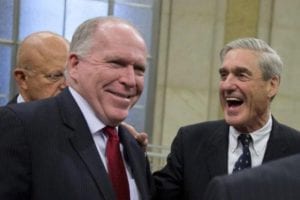 I wonder if James Comey took the picture.

I am writing this on the 18th anniversary of 9-11.  All three of these “public servants” were intimately involved in the mock investigation of that America-changing event.

Bob Mueller was FBI Director during the investigation.  Yes, THAT Bob Mueller.  He was appointed by GW Bush and confirmed one week before the towers came tumbling down.   He was succeeded in 2013 by James Comey.  Yep. THAT James Comey.

Illegal President Barry Soetoro appointed John Brennan as head of the CIA in 2013.  Brennan has been hanging around the dark shadows of government for three decades.  James Clapper is also a deep swamp-rat who served as Obama’s Director of National Intelligence for nearly 7 years.

Larry, Curly, and Moe have been at the center of American “intelligence” for this entire century.  I’m not sure which one is Moe, but can you imagine any one of the stooges running an honest investigation on one of the others?

So they hire Bill Barr to investigate the three stooges and it is reported that Barr and his wife are all warm and fuzzy with the Muellers.  It seems their wives attend the same Bible study.  I wonder if the Bible they use has the 10 Commandments expunged from it.

Just this week a report was released exposing the fraud of 9-11.  A four year scientific study concluded that Building 7, the 3rd building that collapsed on 9-11, was not brought down by fire but rather by a controlled demolition.  The physics of the government “theory” were impossible.  You probably won’t hear about it on the news.

Most of you, because you have swallowed the cover-up done by the Deep Swamp and not your own eyes are not even aware that Building 7, which was never struck by a plane, collapsed in a controlled demolition.  You can find more truth at this website than you will be able to swallow.  www.ae911truth.org

Some claim 9-11 was an inside job…and are laughed at by those who get their information from the Fake News.  The report just released PROVES the official 9-11 narrative is as phony as a Robert Mueller Russian investigation.  I wonder how many in Congress know the whole 9-11 story is fake…

So, as we remember the event that ushered in the unpatriotic Patriot Act, we must face the fact that what they have told us about 9-11 and 18 Muslims with box-cutters appears to be a lie.  The surveillance state which permits the government to spy on private citizens in direct violation of the 4th and 5th Amendments was hatched that clear September morning.  All in the name of THE SWAMP protecting you.

Can you name one American government official held responsible for the events of 9-11?  Me neither, Moe.  Maybe we’ll find the evidence when they release the Warren Report on the Kennedy Assassination.

They are hoping you forget.  Most Americans under the age of 25 have very little firsthand memory of that day.  The events of 9-11 have been shoved down America’s memory hole.  That is the way they had planned it.  Nearly 1/3 of Americans are under 25.  They don’t even remember that day, let alone Building 7.

Folks, these are not conspiracy THEORIES…these are EVIDENCES of the conspiracy.

Psalm 2 says Why do the heathen rage, and the people imagine a vain thing? The kings of the earth set themselves, and the rulers take counsel together, against the Lord, and against his anointed…”  When rulers take council together isn’t that called CONSPIRING?

Wasn’t it Ronald Reagan who told us to “trust but verify?”     Trust who…and verify what?  Fifty-five years later they won’t even release the Truth about the JFK assassination.  Osama Bin Laden was the 9-11 version of Lee Oswald.  Where is Osama buried?

Evil men in high places have seized this nation.  How many have died because of the lies?  How many more will?  We are controlled by a government that deals with “conspiracies” by feeding us lies.  Larry, Curly, and Moe have made us all look like stooges.  Hillary lied and people died.

Who else and what else have they lied to us about?

I’m from the government and I’m here to deceive…