The Tale of Two Lawmen

I don’t know if there has ever been a more endearing character that that of Barney Fife the lovable bumbling deputy sheriff from Mayberry.

Don Knotts’ portrayal of Deputy Fife created a caricature of a small town cop that still lives on.  How often have you referred to a pushy cop as a “Barney Fife” when describing his behavior to a friend?  His false bravado was so outlandish because it was so spot on.  Whether we care to admit it or not there is a little bit of Barney Fife in all of us.

Viewers were drawn to Barney because we all recognized the innocence of his cowardice and we understood that we often struggled with the courage to do what our job required of us.

Whether it was our job as a parent, or a teacher, or just our common role as a good citizen we often found our knees-knocking in the face of a controversy that we knew we should confront.  So many times in our lives our courage did not match our conflict and we sheepishly slinked away from a subject we knew we should have taken on.  We left the dirty work for someone else to handle.

Yes, my friends.  There is a little bit of Barney Fife in all of us.

I was prompted this week by a discussion we were having on my podcast when one of the participants quoted from the Scriptures “to him that knows to do good, and not to do it, to him it is sin.”  After the show was over I began to ponder why we are so hesitant to speak uncomfortable Truth.  Why are we afraid to shoot our bullets?

That’s what brought to mind the immitigable cowardice of Deputy Fife.  He wanted so much to be strong…to do the right thing…to be respected…to honor his office…yet he never was able to live up to the image he had of the position that he occupied.

I love to watch old reruns with my grand children and I loved to point out that Barney was only permitted to carry one bullet.  Yet, in all of the episodes we have watched I have never seen Barney ever actually shoot his bullet. 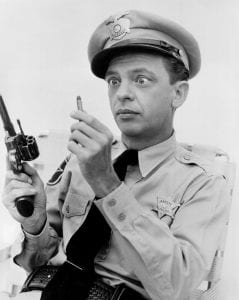 I’m going somewhere with this.  How about you?  Do you still have your bullets in your pocket?  Are the bad guys storming into your town and your fear of confrontation has caused you to tuck tail and run?  Will it ever be time to shoot your bullets?

Barney was so unlike another popular law-enforcement officer from the same golden age of television, Wyatt Earp. 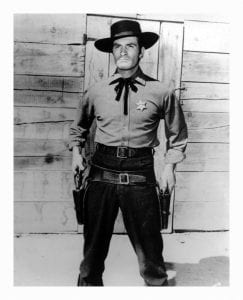 You remember Wyatt Earp and the self-describing theme song that accompanied his show.   It so encapsulated the descriptive nature of the job of a lawman and the image that Barney so desperately wanted to fulfill.  Listen here

Mouth those lyrics again and simply insert the name Barney Fife for Wyatt Earp and see if you can do it without causing yourself some serious cognitive dissonance.  The images don’t match.  Hugh O’Brien was everything that Don Knotts wanted to be but could never find the chutzpa to live out.

Brave.  Courageous. Bold.  Can you think of three more powerful words for which you would want to be remembered?

Tough times are coming to America.  Everywhere you look America and American values are under attack.  Not since the days of Wyatt Earp has the need for courageous Americans ever been greater.  In a time when America needs brave, bold, and courageous leadership all of our formerly great institutions are turning out cowardly, compromising, weak men.

America will never return to greatness if we are depending on top-down leadership.  The only way that America can be great again is if AMERICANS become great again.  Stop waiting on Washington to come up with the fix.  Brave, courageous and bold leadership begins right where you live.

Everything begins at home.  We must be like the Sons of Issachar “which were men that had understanding of the times, to know what Israel ought to do; the heads of them were two hundred; and all their brethren were at their commandment.”

Stop looking at Washington and start looking around you.  Where are tomorrow’s leaders?  Who is teaching them how to lead?  Don’t you think it is time to start developing them?  Find a group of leaders and teach them to lead.  Tomorrow’s leaders need trained today.

In a nation crying for Wyatt Earps we have to stop producing Barney Fifes.