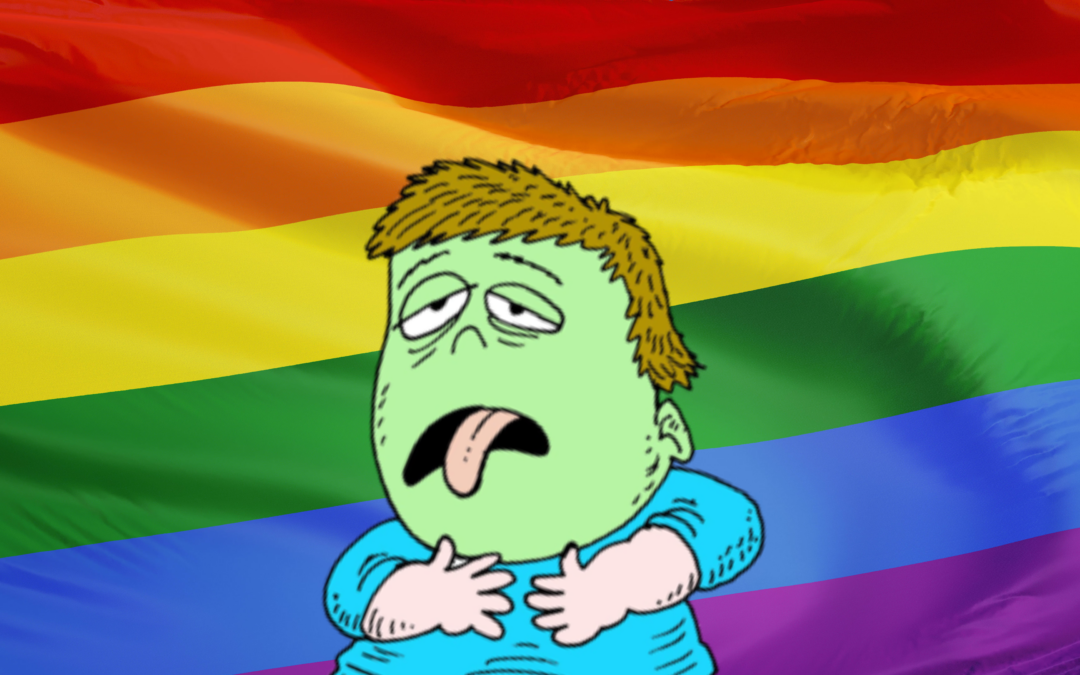 Warning: Commentary is not politically correct. Read at your own risk.

I’m not homo-phobic. I’m not homo-hateful. I’m not homo-latent. I’m homo-nauseous. I really could not care less where a man desires to put his appendage. I don’t hate anyone, but I hate what some people DO.

Deviant–One that differs from a norm, especially a person whose behavior and attitudes differ from accepted social standards.

Well, I am sick of it. I’m homo-nauseous. The homo-sexual agenda is making me sick.

I understand what I am opening myself to. It happens every time I take on this subject. My emails will be flooded by those who are concerned that I must secretly be battling my own homo-feelings, that I need to “get-over” my homo-phobia, and that Jesus would not be so hateful and judgmental. And that is just from the Christians. You couldn’t stomach what the deviants say about me. I’m used to it. It comes with the turf.

But I thought homosexuals were just like everyone else and that all they wanted was to be free to “live their lives” in peace. If that is the case, why won’t they stop identifying themselves by what they do in the privacy of their bedroom? Why are they so intent on making me accept their deviancy? Why are they trying to indoctrinate 6-year-olds into their perversion?

I’m sick of it. Take your behavior into your house and leave us alone.

They are everywhere, these “norm changers.” They are perverted. (I’m sure that makes all of you nervous as well.) But interestingly enough, “perverted” shows up in the dictionary as a synonym for deviant.

Perversion–a person whose behavior deviates from what is acceptable especially in sexual behavior.

That is straight out of the dictionary. It is not a right-wing, fundamentalist version of the word. It is what the word perverted means. The homosexual lives a deviant, perverted life. The dictionary says so. Don’t get angry with me for simply reading the dictionary. Words have meaning.

Here is what their “godfather” Alfred Kinsey wrote. “Perversions are defined as unnatural acts, acts contrary to nature, bestial, abominable, and detestable. Such laws are interpretable only in accordance with the ancient tradition of the English common law which … is committed to the doctrine that no sexual activity is justifiable unless its objective is procreation.” [A.C. Kinsey, et.al., “Sexual Behavior in the Human Male,” 1948]

Their behavior and actions are perverted and deviant. That’s not hate, that’s the dictionary definition. I am only explaining the words. What they do can never be “normal,” so they must change the meaning of normal. They must alter societal standards.

Have you been watching?

They take their “lifestyle” to the streets to “celebrate” their debauchery (which I suppose is a harsh word too unless you read the definition.) “Excessive indulgence in sensual pleasures; intemperance.”

Mom and Dad now are “offensive” terms. These “normal” folks are brazen enough to parade their perversity in the church.

Perhaps Governor Arnold knew what he was talking about when he mentioned “girlie-men.”

The behavior is costing billions in medical care.

Look at the “educational material” they are force-feeding public-school kids. They attack anyone who disagrees with their debauchery. Remember, they must change societal standards to accept their debaucherous, perverted, deviant, lifestyle. They can’t change their behavior so they must force you to change yours. Speaking against it is now called bigotry.

The government promotes it. The schools promote it. TV and films are awash with homo-stars. Churches are embracing it.

Homosexual activists are the real fascists. They are determined to control what you think, believe, and speak. They hate free speech. They will do all they can to silence men like me.

Well, I am sick of it. Leave me alone. Leave our children alone, leave our schools alone, and leave our culture alone.

Isaiah 1:4 Ah sinful nation, a people laden with iniquity, a seed of evildoers, children that are corrupters: they have forsaken the LORD, they have provoked the Holy One of Israel unto anger, they are gone away backward. Why should ye be stricken anymore? ye will revolt more and more: the whole head is sick, and the whole heart faint. From the sole of the foot even unto the head there is no soundness in it; but wounds, and bruises, and putrifying sores: they have not been closed, neither bound up, neither mollified with ointment. Your country is desolate, your cities are burned with fire: your land, strangers devour it in your presence, and it is desolate, as overthrown by strangers.

…but wounds, and bruises, and putrifying sores.”

Putrifying refers to the decay of the body of a formerly living organism into simpler forms of matter.

America is dying. It makes me sick. Keep your behavior to yourself!

Am I the only one who is homo-nauseous?