Meet You at the Polls 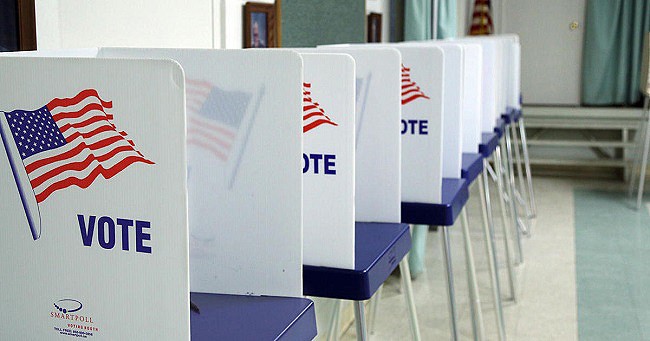 Stay with me to the end.  Here is an opportunity for YOU to make a difference.

Ever since the miracle of Donald Trump’s election nearly two years ago, I have been warning anyone who will listen, that Donald Trump cannot Make America Great Again!  Only the American Christian Church can pull off something as dramatic as that.

The recent Kavanaugh freak show was evidence that something is seriously wrong with America’s two-party system.  There really aren’t two parties.   For the most part, elected Republicans and Democrats are both on the side of bigger, more expansive government.  The idea of principled politicians is a thing of the past.  The “swamp” is nothing more than a conglomerate of politicians who desire nothing more than personal advancement and personal enrichment.

You are free to believe that Republican Senators Graham and Collins finally “saw the light” and did the right thing, but I can promise you that their “change of heart” had nothing to do with their integrity.  Both were “caught by short hairs,” and struck a deal with the men behind the curtain for their personal benefit.  Me thinks there is big time stuff going on behind the scenes.

Both parties are corrupt, Ok?  However, there really is something known as the “lesser of two evils” and the Demoncrats were exposed for the children of the devil that they really are.  I have no illusions about the darkness on the Republican side; however the wickedness of the Demoncrat leadership has no bottom.  They are straight from the pits of hell.

Republican warts aside, how could any CHRISTIAN ever vote for a Demoncrat? The DEVIL’s party was on full display.  They are clearly anti-American, and the greater of two evils. Let me say it again…no CHRISTIAN can ever vote for a Demoncrat.  They are the party of abortion and fake marriage.  Neither position is biblical. Which brings me back to Making America Great Again.

It is time for THE CHURCH to get into the game.  This is not about Trump, Kavanaugh, or political parties.  It is about reclaiming our government one political party at a time.  Let’s bury the Demoncrats and then go to work on draining the Republican swamp.  Hell hath no fury like a Demoncrat victory in November.

Christians in America can restore the rule of law this November. It is time for the churches to get ACTIVELY involved.

A note to our pastors.  It is time to lead.  It is time to pick a side.  It is time to show the MORAL courage and speak the TRUTH to your flocks.  Playing both sides of the fence will no longer work.  Being neutral is cowardly.  LEAD!! We cannot miss the opportunity to MAKE THE CHURCH GREAT AGAIN!

To America’s black pastors.  Open your stinkin’ eyes.  Get off of the plantation. Walk away from the Demoncrats and encourage your flocks to do the same.  We can all see it now.  Jesus is the author of LIFE and the Demoncrats support death.  Life and death have no color.  Jesus supports LIFE!  Black babies do not matter to the Demoncrats.

The Demoncrat Party is now controlled by anti-American socialists who have wreaked havoc on America since seizing the courts in the late 1950’s.  Their sixty-year stronghold on the courts has turned America upside down.  They have used the courts to put through policies that they never could have convinced the American people to vote for.  The American Church can return sanity to this nation.

Please check out www.MeetYouAtThePolls.com.  This is a safe and effective way for the voice of the Church to be heard this November.  This is YOUR chance, and your Church’s chance to play an ACTIVE role in Making America Great Again.

We invite you to participate in a series of nation-wide prayer rallies leading up to Election Day, 2018. We believe that…

God-fearing people in our nation are called to be leaders in our communities and participants in the political process.

The Body of Christ needs to put aside our racial differences and unite on behalf of the Kingdom of God.

Our spiritual leaders need to reclaim their God-appointed duty (and exercise their Constitutional right) to speak the FULL measure of God’s truth to their congregations.

So what are we asking you to do? Simply this. Spread the word in your church and among your friends to Meet You at the Pole in front of your local city hall, county courthouse or state capitol. We will meet once a week for the four weeks preceding the election, and on Election Day we will move from the flag pole to the ELECTION POLLS.   If your pastor is willing take the lead on this and make it a church-wide event, then great! If not, you’ll just have to organize from the trenches.

We are at war for this nation. If the CHRISTIANS would flood the polls on November and vote for LIBERTY we push back the Socialist drift of this nation for the next sixty years.  What kind of nation will we be leaving to our children and grandchildren if we allow the God-haters to gain control?  Please check out the website and get involved in your local community.

Wake up!  Get involved!  Get organized in YOUR hometown.  Motivate your pastor…and your neighbors.  It is not a Red Wave or a Blue WAVE that will change this nation…it is a CHRISTIAN WAVE.