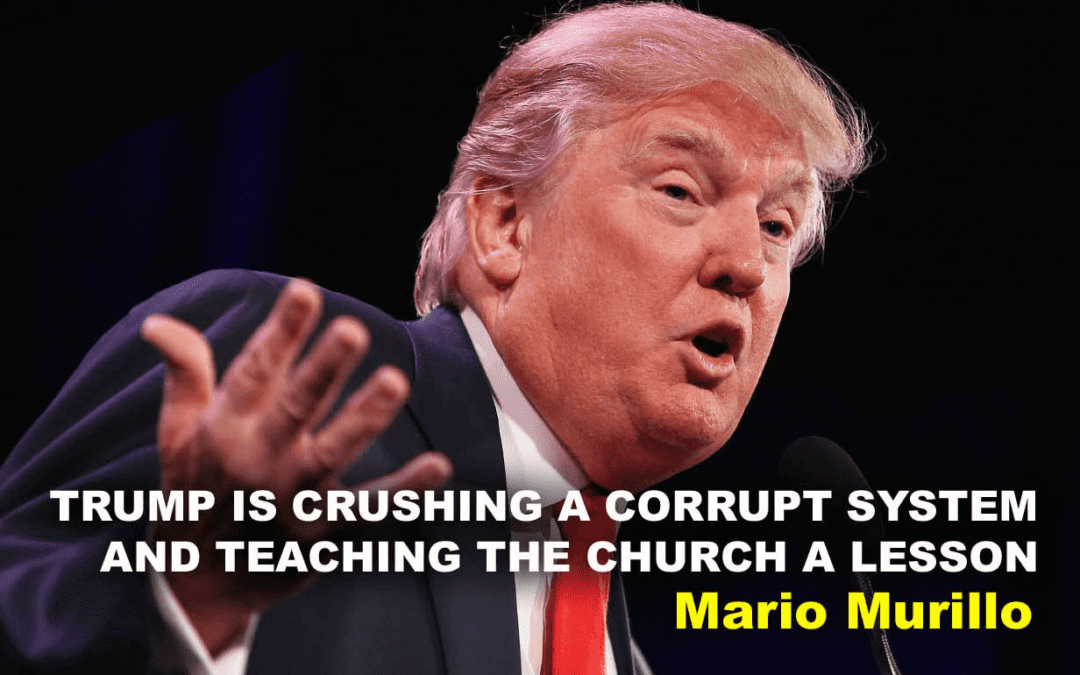 No he is not a fascist.  No he is not racist.  No, he does not think most Mexicans are rapists.  No, he does not want to herd Muslims into camps.  No I am not campaigning for him for president. If you believe any of that—save us both time and skip this blog. This blog is about how he is crushing a corrupt system and teaching Christian leaders a lesson.

Trump got the same say-this-and-die memo that the leftist media issues to all candidates. He refused to comply.   They hate him because he did not have the decency to die.   They have thrown everything at him and not only does he live—his poll numbers rise.

The state-sponsored media and the professional politicians are so desperate that they have been forced to take extreme measures.  Hollywood stars are threatening to leave America.  (They raise our hopes but never leave.)  RINOs are saying they’ll vote for Hillary.  This only makes them sound insane.

Trump met the Obamanable newsman and defeated it.   The corrupt, idiopathic spin machine of the left—which has gagged common sense, free exchange of ideas, for so long — is DOA.    MSNBC gave up and now rants about Star Wars being racist because Darth Vader is black.

What is the lesson to the church in America—especially pastors?

1 Trump says what everyone is thinking but is afraid to say. Who knew that you could say what Trump says and get away with it? No one knew until he said it.

That is a very important thought.  Because preachers withhold vital truth based on fearful images of what might happen and not on actual crisis.

Pastors are afraid to tackle hot-button issues.  However, the Barna Group was not afraid to ask thousands of Christians and here is what they wished their pastor would preach on.

-91% want their pastor to take a public stand on abortion.

-86% want them to address the persecution of the church.

-85% want them to confront dependency on government programs.

-83% want them to speak out about restoring morals.

-82% want to know their position on traditional marriage.

Should you take a stand?  If God be for you…who can be against you?  The Bible demands it…the people want it…and God will mightily bless it.

2. Trump doesn’t need your money. Trump does not study his donors. He lays out his convictions and people rally behind him.  He does not cater to special interests.  He will not get off a subject he believes in for fear that it will hurt his income.  He believes—in the end—truth will prevail.

How much more should men and women of God believe that God is their source?  Vessels of the Holy Spirit should not be hostages to boards or big tithers who have an agenda.   Truth is truth. Jesus Christ will finance His ministers.

3. He forces the question. Trump does not just disagree with Obama. He does not just rant against Obama…he forces the question.   He will not let secular progressives off the hook.   He makes them explain their stupidity.  Trump rips the mask off of a game that both Democrats and Republicans have played in Washington  for years.  He calls them on their waste, fraud and incompetence–dares them to deny it–and leaves them standing there without excuse.

Take our approach to millennials as an example.  We will not force the question on them.   We treat them with kid gloves—we allow them to terrorize the church.  We have no promise that they will ever make a commitment.

I am sick of the catering to millennials.  I am weary of those who withhold truth from them. They are not are some kind of exotic cupcake. They are young—they are afraid—and just like any youth that have ever lived–they need reality.  BOOM.

4.Trump projects a vision of greatness. Donald Trump says “I want America to be great again…you got a problem with that?”   Love him, hate him, but understand why this statement resonates with millions.

It exposes his opponent’s true colors.  They do not want America great again.  They want us to fall in line with the one world government.  Manhood has been sissified by radical feminists… personal initiative has been beaten down by socialism…and Universities have become a course in self-pity.

Millions of believers are done with sermons…they want voices that declare that the Church can be great in America again—that the Gospel is too priceless to cheapen and too powerful to give an apology.  All of this was done to make us needy and compliant.

Trump has no promise that the Holy Spirit will come behind him and confirm his words.  Trump has no anointing for signs and wonders.  If he then…can stand on his convictions and boldly go where no politician has gone before—then how much more should we be wholly given over to truth and dynamic acts of defiance and faith.