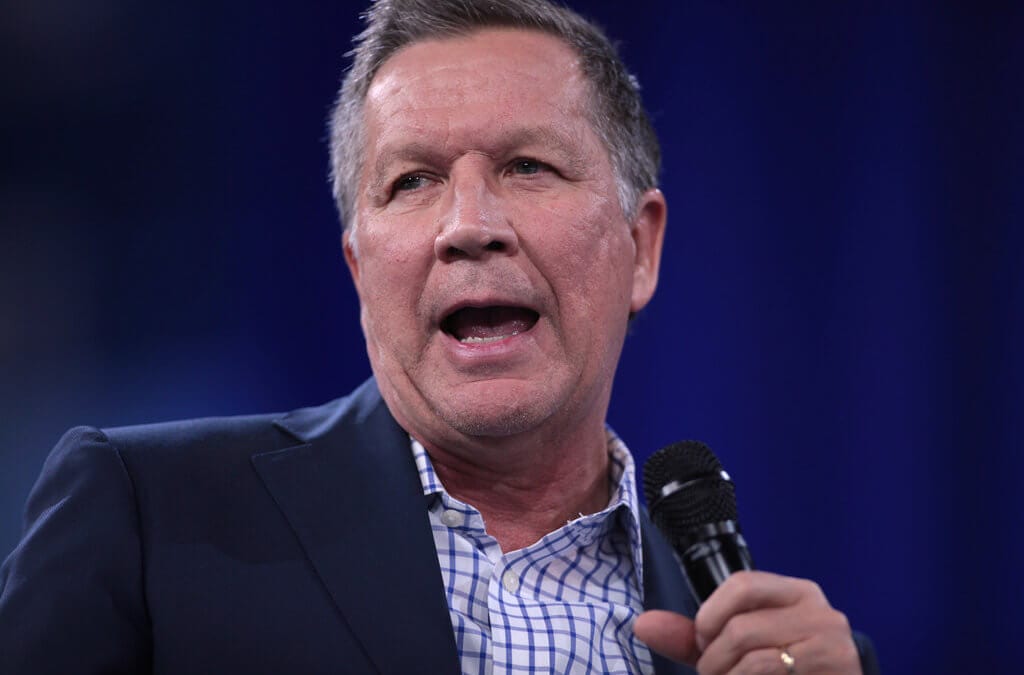 Well the covers just keep being pulled back and more and more RINOS are being exposed.  Our eccentric governor John Kasich is the latest one to have his private parts exposed and it is now obvious for everyone to see that he does not possess what is generally required to make a man a man.

John Kasich is a cross-dresser when it comes to “family” values.  This week Governor Ka-Sick vetoed the “Heartbeat Bill” which would have protected by law and by love every unborn baby that has a detectable heartbeat.  Since scientific evidence shows that a heartbeat develops in a young child somewhere between five and six weeks of gestation this bill would have protected nearly 93% of all unborn children who are currently headed towards the abortionist’s weaponry.

This battle for life was a long five year struggle as pro-life activists, led by pro-life warrior Janet Porter, relentlessly pushed for the legislature to send the bill to the Governor.  This week, both the House and the Senate passed and forwarded this landmark legislation to “pro-life” John Ka-Sick for his expected signature.

Ka-Sick, who loves to brag that his father was a mail man, failed to deliver the mail and with the stroke of a pen refused to rescue the nearly 20,000 children per year this bill would have protected.  It wouldn’t pass court review, this gelded RINO explained as his reason for the veto.

However, once the Heartbeat Bill cleared the Legislature I rejoiced that the life of fewer unborn children would be in jeopardy.  Despite my desire to protect all children, 93% seemed like a pretty good number and I rejoiced with Mrs. Porter and her valiant efforts to see the vote to a successful conclusion.  What a country this would be if we all had her tenacity for life!

The truth is now out.  Both Governor Ka-Suck and ORTL are actually pro-CHOICE with exceptions.  They don’t want to stop abortion; they simply want to regulate it.  As calloused as this may sound, what would all of those lawyers, lobbyists, and abortion foes do for employment if abortion was ever re-criminalized?  Fighting abortion is their business and business is good.

John Ka-Sick made a fool of himself in his recent run in the primaries for the Republican nomination for President.  His recent drift to the left was a purposeful ploy in his desire to reshape the Republican Party after Donald Trump’s expected resounding defeat in the general election.  Today, shock and dismayed, Ka-Suck seems to be a politician without a party.  He is term limited here in Ohio so look for him to pop up at Goldman Sachs or some other cheesy spot where he will feather his nest as a reward for his leading the #nevertrump crowd.

Did I mention that he was rumored to have taken money from George Soros in order to bring down Trump?  Today a story popped up that he actually took money from the Hillary Clinton campaign in his treasonous attempt to block Donald Trump.

The election of Donald Trump has changed all the political winds in America.  It is believed that the reason that, after languishing for five years, the Heartbeat Bill finally cleared the heavily Republican Legislature was because of the likelihood that Trump will change the make-up of the SCOTUS to a more pro-life position.  For this reason alone, the Republicans moved the bill to Governor Ka-Suck’s desk.

Could it be that the signing of the Heartbeat Bill would have been an admission on the part of Ka-Suck that Trump was going to deliver on his pro-life judge’s promise and that was a bit more than the #nevertrump governor could carry in his mailbag?

The saddest part of the whole saga is that Ka-Sick will pay no price for his betrayal.  He is term limited and the weak, anemic, cowardly church will not stand up and demand that the Governor defend the precious babies. This legislation would certainly have made its way through the court system and at some point would have been argued before a Trump appointed Supreme Court that will lean decidedly pro-life.

Who could have ever dreamed that the two greatest obstacles to protecting unborn children would be the largest “pro-life” organization in Ohio and a “pro-life” sitting governor at the top of a solidly pro-life State Legislature?

Jesus warned us that “your enemies shall be those of your own household.”    I think He knew a thing or two about betrayal.

Shame on John Ka-Sick and Ohio Right To Life.  There is nothing hidden that will not be revealed.