Has Mighty Casey Struck Out? 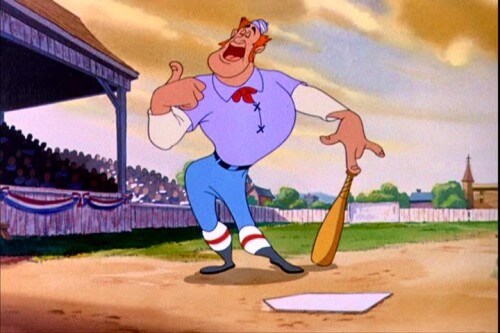 I received an email yesterday from an acquaintance named Lou.  He mentioned what I had said to a friend of mine after the debate Monday night.  I took the prodding of Lou’s email as a sign that I should write about it.

Most Americans are familiar with the story of Casey at the Bat but for those of you who are not here is a brief refresher.

After watching Donald Trump’s performance against Hillary I couldn’t help but chuckle.  Most of the pundits the next day were lamenting how The Donald had blown it.  How he was not on the top of his game.  How he missed so many opportunities to knock the ball out of the park.

“He is just setting her up,” I said to one of my friends Tuesday morning.  “Don’t worry.  He has two more chances to hit a grand slam.”

“What do you mean?” He said.  “He could have put a hurtin’ on her if he had only swung back a couple of times.  Some of those questions were lobbed balls that he could have crushed.”

“Just through high school,” he admitted.  “I wasn’t a very good hitter.  I could field and throw OK, but I had a hard time with the bat.”

“Well, I played clear through college,” I half bragged.  “I actually wanted to be centerfielder for the New York Yankees.  The higher up the ladder you go the better the competition.  To make it to the Big Leagues you have to be special.”

“And your point is?” he questioned.

“Donald trump has made it to the Big Leagues.  Although this may be his first rodeo in regards to politics it is not the first high stakes, high pressure event that he has been in.  Heck, can you imagine some of the mobsters he has had to deal with in his business dealings?  Trump ain’t no little leaguer.”

“I’ve watched my share of great hitters over the years and one thing I can tell you about the great ones is that they are not afraid to ‘take’ a pitch.  In fact, I have often heard coaches tell the good hitters not to be anxious…to take a pitch so that you can get a read of the pitcher…his delivery…the spin of his ball…make sure you hit the pitch YOU want and not the pitch that the pitcher wants you to hit.  ‘Sit on one’ was the expression we used.  Don’t swing at the first thing he throws.”

“I think I see where you are going,” my buddy said.

“Hillary threw a lot of ‘junk’ at Donald the other night and I am sure it was tempting for him to come out of his shoes swinging for the fences.  But he showed a great deal of discipline.  He waited on his pitch.  The object of the game is to win…not to swing at every pitch that looks good.  Donald, like Casey, knows that he still has at least 2 more swings that he can take before the game is over.”

“Of course not.  He is a good hitter.  He is biding his time…waiting patiently for his pitch.  You see, Hillary threw every pitch she had during his first at bat.  Donald now has seen all of her pitches.  He knows what her curve ball looks like, which ones are fast balls, which ones are change ups, and most importantly, which ones are sucker pitches.  He studied her the other night.  He has two more swings before this at bat is over.  He is going to be waiting on the next hanging curve that she serves up.”

“Yeah, but just like Mighty Casey he is running out of swings.  Hillary may not serve up so many ‘soft balls’ in the next debate,” Tim said.

“Are you kidding me?  She showed everything she had the other night.  Her handlers convinced her that she needed to strike Trump out on Monday and they taught her some new pitches hoping he would swing and miss at them.  Plus, he knew that he had a home town umpire behind the plate and he wanted to see how the umpire was going to call the balls and strikes.  I think The Donald has Hillary right where he wants her.”

“Why do you say that?

“Because she showed him her entire pitching repertoire last Monday night.  Her goal was to strike him out.  His goal was to feel her out.  She even served up some spit balls to him but he refused to get flustered.  Like a good hitter, Trump was waiting on his pitch.”

“I sure hope you are right, Coach Dave,” he retorted.  “Just like Casey, Trump has a lot of people counting on him.   There will be no joy in Mudville if he strikes out.”

“The Donald is dumb like a fox.  He has spent his entire life studying his opponents.  He is a master of spotting the opponents weakness.  Hillary and her accomplices may think they have him figured out, but Donald understands that the most devastating home run is the one hit in the last inning.  He has taken his time, and she will have no time to recover from the blow he is about to deliver.  His next at bat will create a momentum that Hillary will be unable to stop”

“What if he swings and misses?”

“Well, that is why they play the game.  If he can’t hit Hillary’s soft balls out of the park then he has no business being President in the first place.  They should bar women and children from watching the next debate.  It won’t be pretty.  Mighty Casey won’t strike out.”