I am Sick of the God and America Hating Left 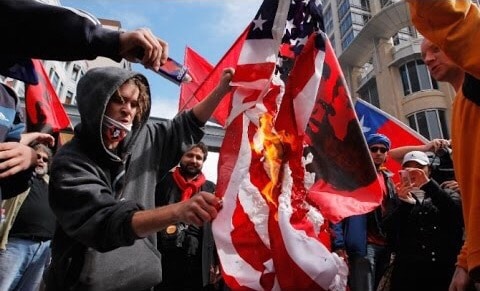 I am Sick of the God and America Hating Left

It takes one to know one.  That was some playground wisdom I grew up with.

If you asked the average lefty to explain to you what it means to be a bigot I doubt if he/she would be able to give you an accurate definition.  Bigotry has been incorrectly linked to racism…another made up word that didn’t even exist in the American lexicon until just before WWII.

The American Left has totally adulterated the English language to the point that we often find ourselves using words that are totally misapplied or improperly used in regards to their original meaning.

Bigot is one of those words.  If you were to check the most authentic organic source on the English Language, the 1828 Webster’s dictionary you will find bigot defined a:

“A person who is obstinately and unreasonably wedded to a particular religious creed, opinion, practice or ritual.”

Look up the word “racism” in the same online version referenced above and you will come up with…NOTHING.  That’s right, when Noah Webster put together his exhaustive work on the English language there was no entry for “racism.”  The word simply did not exist.

But in today’s increasingly knowledgeable and stunningly dumber “college educated” millennial generation facts are becoming less and less valued.  A re-working of words and a strong focus on “feelings” has given us a less logical more emotive generation of Americans.

Words have meaning so if you want to change the world simply change the words.  Check this out… I wrote it back in 2009 and I include it for all of the critics who read my columns and accuse me of  only recently having fallen off of the turnip truck.  The more I look over my shoulder the more I realize how right I have been.  A society will never progress if it forgets from where it has come.

Our “roots” are being dug up all around us and we are suddenly finding ourselves with a generation of young people who share very little in common with the beliefs of their grandparents.  This has not happened by accident.  Bigotry has been the aorta of the LEFT and they have sucked the life right out from under God-fearing Americans.

Open your eyes and look around and you will easily recognize that the snowflakes on the LEFT are the real ideologues.  They are the least tolerant, least accepting, and are far more aggressive in the forcible advancement of their own “particular religious creed, opinion, practice, or ritual.”  They are not content in simply exercising their “unreasonably wedded opinion” but are hell-bent on making you follow their misguided creed as well.

Lefties are not content with simply expressing THEIR beliefs but are aggressive in demanding that you cow-tow to their screwy, anti-logical belief system.  Simply “tolerating” their beliefs is not enough.  You are required to not only attend their parties but to bake and deliver the cake to their diabolically deviant displays.

Well, I am sick of it.  I am sick of the one-way bigotry.  I am sick of being expected to sit silently on the sidelines while the enemies of all things decent destroy everything my ancestors worked to build.  The God-haters are not content to simply stand on the shoulders of the pillars that built the freest nation in the history of the world but are intent on a Samson-like pillar pull designed to crumble this once great Christian nation.

I’m sick and tired of the immunity with which some ethnic groups seem to have in regards to their behaviors.  I’m sick of lazy backs and lazy whites who feel that they have the right to steal out of my wallet.  I’m sick of the sexual deviants teaching debaucherous behaviors to my grand children in the name of tolerance and diversity. I’m sick of the Hollywierd homos and pernicious pedophiles that undermine American decency with every movie they make.

Look around you, my friends.  Most of the problems that we face in this nation have everything to do with BEHAVIOR and nothing to do with bigotry.  It is the destruction of the moral code that has led to the lawlessness of the citizens of this nation.  Not all cultures are the same.  Not all values are equal.  Not all beliefs are true.  Multi-culturalism is societal AIDS.

My Christian faith teaches me that there is a hell to shun and a Heaven to strive for.  Behavior has consequences and I’ll be dammed if I am going to sit passively on the sidelines as the Devil’s doctrines of demons destroy all that is good.  What they do in their private life is between them and the Lord.  I am pro-choice in regards to the after-life.

Hell hath enlarged its mouth as many fools rush head first into the fiery pit.  Although the road to hell is paved with good intentions I refuse to permit my progeny to be road kill on their Left’s hedonistic highway to hell.

For the first time in a generation I believe we have a short window to pushback against the forces of darkness.  Now is the time to stand up and call ‘em like you see them.

The real bigots in America are those slimy snakes on the LEFT.  It is time we started exposing the Truth.