It’s Time to Man Up For Jesus 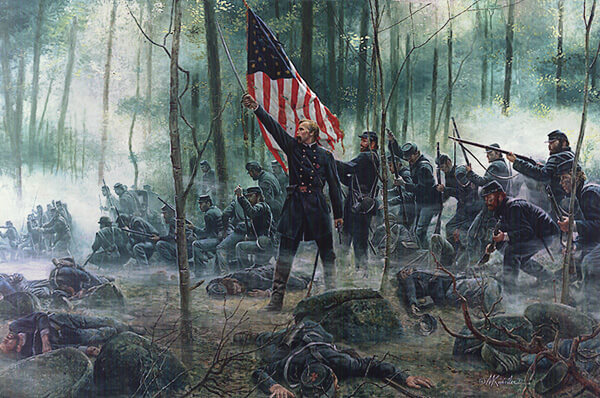 (Joshua Chamberlain at the battle of Little Round Top) It’s Time to Man Up For Jesus!

I saw this week that President Obama’s approval rating is nearing 50% again.  What in the world is wrong with people?  Have we fallen so far that the American people approve of this obvious Son of Satan?

Mr. Obama showed his true nature this past weekend by running interference for TARGET when he doubled-down on, “transgender” bathrooms.  Until the social scientists got involved we called them cross-dressers. I hope you are smart enough to realize that this whole debate is not about restrooms.  It is about the promotion of deviancy.  It is about what the Bible calls Doctrines of Demons.  It is about normalizing that which is not normal.

Homosexualities in particular, and deviant sexual behaviors in general, are the fruits of perversion from the decadent American culture.  Obama is the Godfather of the anti-Christian mafia that is hell-bent on the destruction of Western Civilization.

Bathhouse Barry Obama just poked every God-fearing American in their slowly opening focused-on self eye.  “Take that”, he said as he boldly declared that boys and girls can now use the same potties in America’s public schools.

The dude is evil, OK?  What kind of a man not only applauds deviancy but forces the perversion onto innocent children?   A wicked person does.  Barry Obama is wicked.  I am sorry but I don’t know the politically correct term for wicked. That was the word Jehovah used… So I guess it will suffice for me.

“But whoso shall offend one of these little ones which believe in me, it were better for him that a millstone were hanged about his neck, and that he were drowned in the depth of the sea.”  Matt. 18:6.

The mask has completely come off.  The dude is deviant.  The emperor not only has no clothes but he doesn’t care which clothes our children wear. Jesus was only a man!  Expecting a boy to act like a man has become, “discriminatory.”  It is tyranny of the minority.  Barry has bullied his way into our public restrooms.

In their heart of hearts black pastors have to be ashamed of themselves.   Their promotion of this demon simply based on skin color has contributed to the destruction of this nation.  Black pastors own it.  They promoted a man based on the color of his skin and ignored the content of his character.  The roosters are coming home to roost in the ladies restroom.  They made it about race.  Don’t start cock-a-doodling at me when I merely point it out.

But what about the rest of us?  How long are we going to sit around with our hiny glued to our church pews and allow this demonic dictator-in-chief destroy Western Civilization?  That’s what he is doing, you know.  This isn’t about homos and their cross-dressing friends.  This is about the destruction of Christianity and all that it stands for.

The only thing keeping the world from falling into the grimy grip of the New World Order and their declared goal of One World Government is the liberty that is found only in Christianity.  If Barry and his boyz can destroy Christianity then the world will melt like wax into the hands of the globalists.

But you are too damned brain dead to see it.  You and your cowardly pastor hide inside your over-sized buildings and play, “church” while the foundations of this nation are being systematically trodden under foot.  “Good for nothing”… That is what Jesus called it in Matt: 5.

WAKE UP MEN !! Our fathers started a revolution because their 1775 version of Starbucks was charging a little too much tax for their lattes.  But things were different then.  Men were men… More to the point… PASTORS WERE MEN.

Not today.  The Devil’s minion in the White House is laughing at America’s pulpits.  Barry sees what is going on across this nation as American pastors turn to the government for “Pastor Protection” legislation designed to keep the Devil from eating their lunch.  Meanwhile, Obama and his spiritual advisors are chuckling all the way to Mecca as the, “men of God” cower under their beds.

Many of us have spent decades trying to warn people.  Our appeals to pastors have gone unheeded.  The more desperate the times have become the more irrelevant the sermons have waxed.

Planned Parenthood is selling aborted body parts.  Men are marrying men.  The doors to the girl’s restrooms and locker rooms are being flung open.  Muslims and their sympathizers are swarming throughout the catacombs of government.  Christ has been outlawed.  Satan has been exalted… And our watchmen are blind… Or worse.

The opponents of Christianity are running their bulldozer full-throttle as the foundations of American collapses like a folding chair.  Your churches won’t save you.  Your pastors won’t even try.  The bullies in Washington have come out from behind the curtain and they have Christians in the crosshairs.  You are on your own now boys.  Soon you will realize that not even the rapture will save you.

It’s Time to Man Up For Jesus – When you will wake up? Before Its to late? Your are not guaranteed your retirement and die a normal old age death! Think about this decade… and your grand children!

“If you will not fight for right when you can easily win without blood shed;  if you will not fight when your victory is sure and not too costly; you may come to the moment when you will have to fight with all the odds against you and only a precarious chance of survival. There may even be a worse case. You may have to fight when there is no hope of victory, because it is better to perish than to live as slaves.”  – Winston Churchill

It is time to get involved.  Call your local school Superintendent and find out the policy at your local school.  Demand your pastor lead the charge and tell them to stop saying its no time for Jesus! We all need to know the times!  Demand your state reps defend the innocent children.  Get out the lanterns and the pitchforks.  That’s what our grandfathers would do.

Diabolical times are upon us.  Let me invite you to some preparation and some hope.  I have been hosting a live show each weekday morning from 7-8 EDT.  The show is live but it is also archived for later viewing at CoachDaveLive.com

The show will give you hope.  It will help you return to Godly manhood.  It will help prepare you for the days that lie ahead.  Your pastor has let you down.  Your children and grand children are depending on you.  It is time to man up.  Check this out!!

God needs a few good men. It’s Time to Man Up For Jesus! This is a hill worth dying on.