The Supreme Court’s Bait and Switch 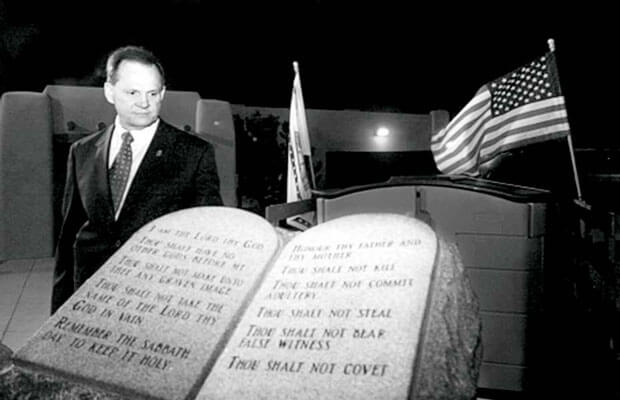 As many of you are aware Judge Roy Moore is directly in the sights of the Federal Judiciary again.

That’s right.  But this time he is not alone.  The Governor of North Carolina is fighting back.  So is the state of Texas.

Judicial tyranny is breaking out all across America as Obama’s Justice Department is being used to “fundamentally transform” this nation.  This transformation is being accomplished by the out-of-control oligarchy currently masquerading as a court system.

I have a stunner to share with you…but let me lay some ground work for you.

“Transgender” restrooms are all of the rage in America today.  In fact, they have become so important to the sexual deviants that it has now garnered the support of the Obama administration as they try to ram-rod sexual anarchy down the throats of mainstream America.

This fight is not about restrooms, although that is the avenue that they have chosen to drive their legal bulldozers down in their attempt to change the landscape of America.  This sodomy-focused army is hell-bent on removing all sexual standards in this nation.  Their blitzkrieg through the courts would rival the cultural destruction of Sherman’s march to the sea.

And it is built upon a lie…a Two-Card Monty…that would make even the world’s greatest magicians envious…and they have been able to pull it off in full view of the brain-dead American people.

Here is the skinny.  Sodomy-based marriage is not now, nor has it ever been, legal.  It is a lie.  As I will show you in just a few sentences it is the all-time greatest legal sleight of hand ever pulled in any society…ever.

In 1996 the US Congress passed the Defense of Marriage Act (DOMA) and it was signed by President Clinton on September 21, codifying into law that marriage was a union of one man and one woman…ONLY.  DOMA was the “law of the land” until it was “overturned” by the 5-4 SCOTUS  United States v Windsor decision on June 26 2013.

One of the central arguments of Windsor was that regulation of marriage was in the sole jurisdiction of the STATES and thusly was not within the power of the Federal government.  Because, SCOTUS ruled, marriage was an issue for the individual states to regulate there was no Federal “standing” permitting FEDERAL law to be written.

Did you get that?  The SCOTUS in Windsor ruled 5-4 that marriage fell under the jurisdiction of the STATES and therefore out of the regulation of the US. Congress.  Judges Kagan, Breyer, Kennedy, Sotomayor, and Ginsburg ruled in the majority. From 1996 through 2013 there was a FEDERAL law defining marriage as one man one woman only.  Windsor struck it down.

Fast forward to June 2015 when the landmark Obergefell case was decided by the same 5-4 majority than had ruled against marriage in 2013 citing the fact that marriage was under the jurisdiction of the STATES.

Here comes the bait-and-switch.  In Obergefell SCOTUS used the power of the FEDERAL COURTS to “legalize same-sex marriage” by using the 14th Amendment’s “equal protection clause” to grant FEDERAL protection to homo-sexual marriage.  The majority opinion was supported by the same five judges… Kagan, Breyer, Kennedy, Sotomayor, and Ginsburg…who two years early had overturned the FEDERAL LAW (DOMA) claiming marriage was a decision left up to the states to regulate.

Did you follow that?  In 2013 the SCOTUS said marriage was a STATE issue.  In 2015 SCOTUS determined marriage was a FEDERAL issue.  The same five judges were the majority in both decisions.

Sodomy-based marriage became “legal” only through the bait and switch tactics of five corrupt judges on the SCOTUS.  Courts CANNOT make law.  The opinion of SCOTUS in both cases was bald-faced social engineering at its finest.  In order to “fundamentally transform marriage” SCOTUS had to remove DOMA from the law-books.  Once this was accomplished via their ruling in Windsor, the court cleared the deck for their companion ruling in Obergefell.

This is the greatest example of legal-gymnastics in the history of the world.

Please take 7 minutes to watch this fantastic video produced by attorney Jeff Cobble clearly exposing the fraud of the social engineering done by SCOTUS.  It proves that the emperor has no clothes.

Judge Roy Moore is standing on solid ground.  We must awaken Americans to the sham that five unelected judges have pulled on this nation.  This is tyranny at its most egregious.

For greater study please visit DEFYTYRANTS.COM where the answer to judicial tyranny is further explained.

In addition, this website is just choc full of goodies!!

Daylight is burning.  We must awaken this nation!!

The Courts CANNOT MAKE LAW.   It is time for the STATES to reclaim their sovereignty.