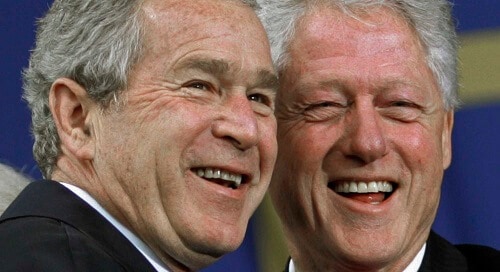 Some of you may not be old enough to remember when Jesse Jackson chanted the warning to “Stay out the Bushes.” (I think he left out “of.”) But America would be better off today if we had heeded his warning.

Yes my friends. All Americans would be better off today if the Bush family had never entered into politics. Two presidents and a wanna-be-third later it is obvious that Jesse Jackson gave us fair warning in the 2000 election when he told us to STAY OUT THE BUSHES.

Americans love royalty. Perhaps it is in our DNA from the days when our ancestors lived across the pond, but for some weird reason Americans today still love their leaders to be name brands. Ever since 1980 whenever election season rolls around you can count on one thing for sure…there will be either a Bush or a Clinton fighting for the big chair at the head of the table.

Bush, Clinton twice, Bush Jr. twice, almost Hillary, then almost Jeb and Hillary in the ultimate episode of Family Feud…in a nation of over 300 million people how is it that two families have dominated the election cycles for over 30 year? I am sure that we have all heard of nepotism but the same two clans fighting over the White house for a period of nearly three decades is a little suspect to me.

It is not at all unusual for religion to produce “heirs” to the throne. In almost a rite of passage we see “ministers” hand their “ministries” over to their chosen child…rattle them off…Billy and Franklin Graham, John and Joel Osteen, Charles and Andy Stanley, Jerry and Jonathan Falwell, Robert and Robert Jr. and Carol Schuler…to name a few.

But religion, for the most part, has become Big Business so it is understandable that Christian ministers would like to keep the ministry business in the family. Leadership has its perks.

But the political world should be different. There is something seriously amiss when two crime families are able to build a political machine that controls the entire nation. Heck, there has been more turnover in the Mafia leadership than there has been in American politics in the past 30 years.

That’s what they call them you know…machines…the Clinton machine against the Bush machine. Both families are mob families who sit atop of our nation’s Hegelian dialectic that masquerades as a political system.

And most Americans are too darned brainwashed to see what is going on. Eighteen months ago it was almost a given that the 2016 election would be between Jeb Bush and Hillary Clinton. If it had not been for the ascension of Donald trump that is exactly what we would be seeing today.

There is no real difference in the political parties. I think Americans are finally starting to awaken to that fact. Although the parties may appear to hold different positions on the issues there can be no doubt that there really is very little difference between the way that they actually govern.

Some talking heads call them the political class. Others call them the pundit class or the ruling class, but the fact remains that they are all a part of the same family business and that business is government. Except government isn’t supposed to be a business, but as both the Clintons and the Bushes have shown us it is a very good way to get rich. “Public service” has become very lucrative.

I came across this picture and checked the veracity of it to see if it was faked. It wasn’t. This is Bill Clinton, George Bush, and George Wallace at an event in 1983. Thirty three years ago they were one big happy family.

The Republican Party was destroyed by the Bush family. Pappy Bush betrayed the Reagan revolution when he famously uttered “read my lips…no new taxes”…and then raised them. “W” gave us “compassionate conservatism”, expanded the growth of government, and opened the door to the loss of freedoms through The Patriot Act. The leftward tilt the Bush Machine brought to the Republican Party gave us full blown socialism in the person of Hussein Obama.

The Clinton’s destroyed the morality of this nation. They made lying under oath and adultery normal and acceptable practices. Because of Bubba, I, and millions of parents like me, had to explain to our teenage daughter what oral sex was. That single act ushered in the total desecration of the office of the President.

The Bush family and the Clinton families are tight friends. Barbara Bush once said that Bubba was like “another son” to her. Recently, several members of this Royal Republican family have made it known that they are with Hillary. So much for party loyalty. GW once famously said that “you are either with us or you are with the terrorists.” Their lack of loyalty is astonishing. I guess we see which team he and his family are playing on.

The Reagan Revolution gave us “Morning in America” and it has been getting rapidly darker ever since. Pappy Bush’s Presidency led to Bob Dole, GW Bush, John McCain, Willard Romney and nearly JEB! Maybe Donald Trump can blow the entire family business up.

We should have listened to Jesse Jackson. America would have been better off if we had “stayed out the Bushes.”