An Appeal to Heaven with Book Author John Diamond 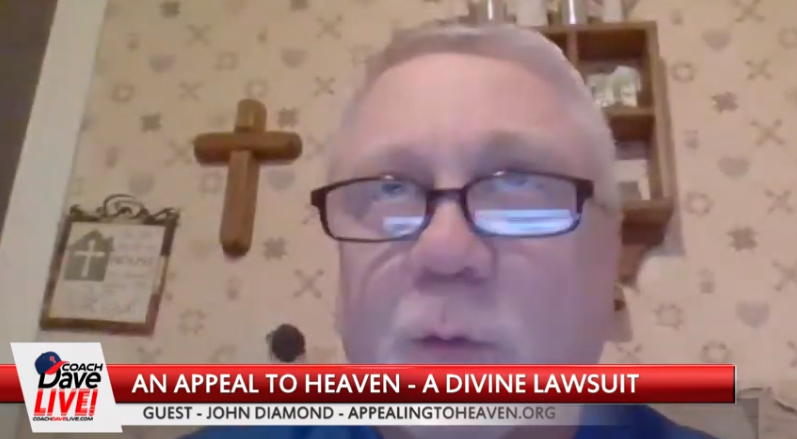 Today is usually flea flicker Friday.  Not this week.  Coach is bringing on a special guest.

Anyone can join the daily show LIVE at www.coachdavelive.com.

Coach urged folks to support the Wisconsin Christian News Expo and went over some other upcoming events.  You can view a comprehensive list of upcoming events on the “Events” link on this website.

Tomorrow is the Day of Mourning.  Michelle discovered yesterday in phone conversations with Christian friends that nobody knows about it.  Pastors aren’t promoting it.  Christians don’t know about it.  Coach observed that is the same thing over and over and over with the Church.

Coach introduced John Diamond.  He’s known him for fifteen years.  He wrote a book about the Ten Commandments that affected the Coach.  He ran for Congress.  He’s been laboring in obscurity.  He actively works as a Christian historian and wants to make a difference in politics.  His latest book is entitled “Appeal to Heaven:  A Cry for Divine Justice.”  John is a veteran of the United States Air Force.

“For unto us a child is born, unto us a son is given: and the government shall be upon his shoulder: and his name shall be called Wonderful, Counsellor, The mighty God, The everlasting Father, The Prince of Peace.”

John diamond pointed out that the word Counsellor here means lawyer.  God isn’t a psychologist.  He’s a lawyer, lawgiver and judge.  God is a defender.  He is the father of the fatherless, widows etc.  John discussed the parable of the widow.

The Appeal to Heaven movement is about going above the Supreme Court to God to fix the problem.  We must appeal to the divine throne of God.

There is a court that is higher than the Supreme Court.  When you get a lousy decision in a court you file an appeal.  John is arguing that the American Supreme Court is tyrannical.

Coach invited John to go over the Table of Contents of his book.

John toured the country talking about the ideas in this website.  John became frustrated by the pastors.  None of them would listen or do anything.

John and Coach talked about “The Twelve Lies” which are featured on the website.

One of the lies is that the Church should not get involved in the affairs of government.

At the time of Christ the term church or ekklesia was not a religious term.  This was the place of government administration at the gates of the city.  It is a political assembly of an ancient greek state.  It was the place of legal counsel.  Upon this rock I will build my “ekklesia.”  Jesus was talking about a theological democracy.

Jesus was saying that I will give you the delegated authority of heaven to declare that things are not lawful.

Lie number nine is that “You want to create a Theocracy.”  John’s short answer to that is that the world is a theocracy.

Lie number 10 is that you cannot legislate morality.

Lie number 11 is that it is wrong to Judge.

John talked about examples of interposition in the Bible.

The Church is the conscience and enforcer of God’s moral law.

If we fail in appealing to heaven then America is going to descend into violence.

John Diamond cited American movements that included both prayer and action.  The civil war started as a prayer movement and then became a war.

Coach closed the show highlighting John’s book, “An Appeal to Heaven:  A Cry for Justice.”