Alfred Kinsey and the Sexualization of America 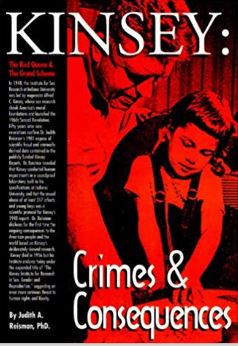 Unmasking the sexual revolution and exploitation of children.Alfred Kinsey in the middle 20th century did “tests” on babies and children, sexualizing them. He and pedophiles sexually abused 196 children and wrote the “science” of what they discovered.  The Kinsey Report published in 1948 changed how people viewed sexuality. Kinsey used pedophiles to “prove” that children are sexual from birth.

At the time a virgin in college, Hugh Hefner, read Kinsey. He said, “Everybody’s been lying to me.  Now, I will be Kinsey’s pamphleteer.” Hefner created PlayBoy magazine in 1953. Sex for pleasure industry followed – including the birth control pill, pornography and more.

Judith Reisman’s book: Kinsey Crimes and Consequences is documented research behind Kinsey’s life and “work.” She has done extensive study on Kinsey, and says, “The public has been raped. The whole nation has been raped. You cannot expect to survive a rape without a lot of pain and trauma.”

All this stuff has become normal because there’s no resistance to it. The Church is accepting it. They are not fighting against it. The problem in America is that the Church has tolerated it.

Stand up and fight!