Don’t be a Sissy Christian by Self Censoring 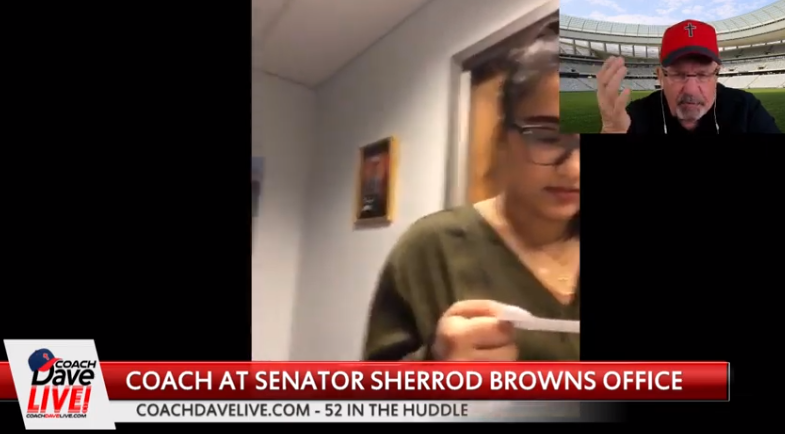 Coach opened the show talking about going to Allentown, PA today.  He’s leaving at 2 pm today.  Get in touch with him if you’d like to go.  He also still has room in his van for Wisconsin next weekend.

The Lord needs soldiers.  It is an important day.  Coach said that he has a sense of urgency today.

Coach talked about his “plan” for the Huddle in Allentown.  The purpose is to help Christians connect with one another and learn that you are not alone in the battle.

Next weekend is Marshfield Wisconsin.

A member of the huddle talked about winning a victory.

We can win.  We have to decide that we are going to win.

Senator Brown works for the people.  The people don’t work for him.  His office is full of Leftist millenials.  Senator Brown is a wicked communist that the church should be confronting.

Coach talked about being raised Roman Catholic.  Coach found Him outside the Catholic Church.  He is there inside the church.  You have to look really hard to find him.  Coach talked about his catechism as a youth.  It came back to him this morning.  This morning the Holy Spirit asked him, “Why did God make you.”  The answer in the Catechism is to love and serve Him.  Coach said he learned to fear and reverence the Lord.  When he was a boy he knew when he walked into the Catholic Church he knew that there was somebody in there that he didn’t want to mess with.

Today you go to Church to get what YOU need.  Church isn’t about God anymore.  It is about us.

Saved Catholics become the greatest Christians.  Coach talked about confession … the importance of the confessional.  He talked about the feeling of release that he felt after doing the prescribed penance subscribed by the Priest.  It taught him a reverence of the Lord.  It didn’t teach Coach the grace of Jesus.  The fear of the Lord is the beginning of wisdom.

Why did God Make you?  This is a fundamental idea in Christianity.

A man in the huddle talked about God creating us for family.

Why do we need armies, families, teams etc.  These entities are made up of people.  You enlist to get into the army.  If you are in the family of God you are in an Army.  You have enlisted.  Dale pointed that we crushing demons under our feet.  Are we being taught that we are more than conquerors?

Coach went through this article.

George talked about the importance of presenting the reality of God’s judgment to public officials.  Coach observed that God made Christians to remind people of God’s judgment.  We aren’t made to just sit in our houses and pray and have our needs met.  We are made to serve Him.

Coach read down through the Catechism.  He described the Catechism as meaningless brainwashing.  It doesn’t stick.  The process of Catechism doesn’t bring people to salvation.  He said that the same problem exists in the evanjellyfish church.  Churchianity.

What would Jesus do about abortion if he were walking the earth today?  The huddle agreed that he would go and turn over tables.  Coach asked “Why aren’t we?”

We have adopted the ways of the world because there is very little truth in us.

Coach talked to the parents.  If you believe that just taking them to Sunday School is going to make them Christians.

How many people have shared the video?

218 people have shared the video.  Coach asked “What?”  Have you shared it?  People are afraid to share it.  They don’t want to offend friends and family.

Talked about the need for more “conservative energy.”  Coach and Julio are being attacked by Right Wing Watch.

Sissified Christian men and women are what is holding back the program’s growth.  You are getting pushback in your home because you want to be a man for Jesus.

“All I can say about this type of female equality  —  I have experienced war. I know how hard it is. I know how many men’s nerves have been shattered by war. I have often seen them return by the dozens, doddering, completely ruined and broken. The idea that a girl or woman should take this upon herself — I could have no respect for German men then.  As long as we have a healthy male gender in Germany, no female sharpshooters or grenadiers will be trained in Germany. That is no equality, but rather, inferior rights for women because it is much harder for her than men. We won’t do it – because for us, the woman has been the most faithful work and life companion of the man at all times.” — Adolph Hitler, Chancellor of Germany

Coach says it is his wife that enables me to go do what I’m supposed to do.  She encourages me to go!  If a woman can do it why do we need  men?

The sissification of everyone is everywhere.  Coach says that he has only 216 shares because he is too manlike.  “The girl in Senator Brown’s office would much rather have talked to my wife!”, said Coach.

Little boys are being emasculated in Sunday School.

Coach asked who the power is in the Catholic Church.  You have to go through Mary.  How come the church has exalted Mary instead of John the Baptist.

Mark Trump pointed out that we are ignorant of the Devil’s devices.

Coach played a one minute clip from Rogan and Jones about self censorship.

Coach talked about wanting to get victory over evil in this natural world.  Coach is placed here as a soldier.  I’m a dead man already.  I’m not going to pastors, bishops etc. take me off target.  I  will stand before him and give an account for what I’ve done.

We need the armor of God.

Money only makes us soft.  It lures us away from our purpose in Christ.

The Muslims are turning us into sissy’s in our churches.  Coach observed, “They are going to kick our ass.”

Coach said that everybody should be doing this.

He played the opening four minutes of the video.  Coach asked about birth right citizenship.  A foreigner who has a baby in America is given a birth certificate making the baby an American citizen at birth.