Endure Afflictions, Do the Work of an Evangelist 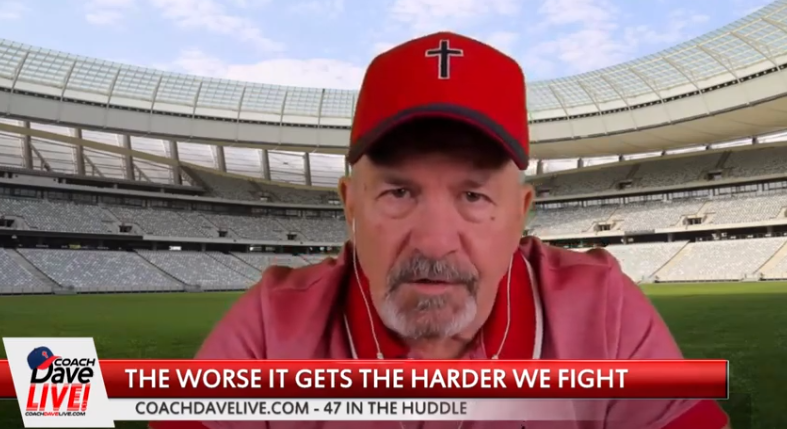 Coach started thinking out loud about March 21st.  He is thinking about broadcasting live from the Circle Mound as the sun rises.

He talked about the importance of the abortion fight, but his desire with today’s show to move off that topic.  He mentioned the Allentown Pennsylvania Huddle that is taking place this weekend.

Don’t grow weary in well doing.  It is hard to get stuff started.  Expect difficulty if you are trying to get something started.  Coach will help all he can.  He praised the work that Denny is doing in Iowa.

Victor mentioned the save James movement and the fact that there is activity on that front today.

And Jesus came and spake unto them, saying, All power is given unto me in heaven and in earth.

Coach expounded on the great commission in the gospel of Matthew.  ALL power is given unto Jesus.  He pointed out that Jesus has All THE POWER.  1 John 3:8 … Jesus destoyed and destroys the power of the devil.  Satan has only the power that we give him.  Judges have no power to do unrighteousness.

The world does not belong to the devil.  The world in America once included the Bible and Christian truths.  The Bible was in the schools not that long ago.  We act like we have no power when Jesus has ALL POWER.

Larry pointed out that Jesus is in control, but individuals have freedom.

The worse it gets the harder you preach.

And they shall turn away their ears from the truth, and shall be turned unto fables.

Paul is giving us a scouting report.

But watch thou in all things, endure afflictions, do the work of an evangelist, make full proof of thy ministry.

The attitude of the church is just the opposite.  We’re supposed to bring them into the church and let the pastor save them.

Chad said that we need to be praying against the occult forces.  Coach mentioned imprecatory prayer.

Coach spoke to those who are made uncomfortable by this discussion of assertive faith.  He told them to go back to their happy feet church.

IM’PRECATORY, adjective Containing a prayer for evil to befall a person.

You don’t pray these prayers against brothers and sisters in Christ.  You make these prayers with a broken heart.  We pray against the enemies of God.

(A Psalm of David.) Plead my cause, O LORD, with them that strive with me: fight against them that fight against me.  Take hold of shield and buckler, and stand up for mine help.  Draw out also the spear, and stop the way against them that persecute me: say unto my soul, I am thy salvation.  Let them be confounded and put to shame that seek after my soul: let them be turned back and brought to confusion that devise my hurt.  Let them be as chaff before the wind: and let the angel of the LORD chase them.  Let their way be dark and slippery: and let the angel of the LORD persecute them.  For without cause have they hid for me their net in a pit, whichwithout cause they have digged for my soul.  Let destruction come upon him at unawares; and let his net that he hath hid catch himself: into that very destruction let him fall.  And my soul shall be joyful in the LORD: it shall rejoice in his salvation.  All my bones shall say, LORD, who is like unto thee, which deliverest the poor from him that is too strong for him, yea, the poor and the needy from him that spoileth him?  False witnesses did rise up; they laid to my charge things that I knew not.  They rewarded me evil for good to the spoiling of my soul.  But as for me, when they were sick, my clothing was sackcloth: I humbled my soul with fasting; and my prayer returned into mine own bosom.

Coach mentioned that there are many imprecatory psalms.  Judgment is God’s tool for salvation.  Judgment is good.  It is the fear of the Lord.

Coach’s grandson is three.  He punched Coach hard a few weeks ago.  Coach looked at him and said, “If you do that to me again, I’ll make you cry.”  The Lord can make you cry.

Roger asks, “Is there any Biblical support for bringing heathens into the church to be saved?”  There is no support in the Bible for doing that.  Coach said that he hopes Hillary Clinton gets saved.  But he prays that their evil actions come back on them.  For the sake of the babies.

“And whosoever shall offend one of these little ones that believe in me, it is better for him that a millstone were hanged about his neck, and he were cast into the sea.”

And into whatsoever city or town ye shall enter, enquire who in it is worthy; and there abide till ye go thence.  And when ye come into an house, salute it.  And if the house be worthy, let your peace come upon it: but if it be not worthy, let your peace return to you.  And whosoever shall not receive you, nor hear your words, when ye depart out of that house or city, shake off the dust of your feet.  Verily I say unto you, It shall be more tolerable for the land of Sodom and Gomorrha in the day of judgment, than for that city.

Woe unto thee, Chorazin! woe unto thee, Bethsaida! for if the mighty works, which were done in you, had been done in Tyre and Sidon, they would have repented long ago in sackcloth and ashes.  But I say unto you, It shall be more tolerable for Tyre and Sidon at the day of judgment, than for you.

Larry pointed out that you can’t serve two masters.

Bobby Lee read a statement that he published on Facebook.  He is getting more and more bold every day.  Coach praised him for that.

Coach asked, “If I pray that, is that unChristian?”  Why aren’t we taught that?  Many people say that’s the Old Testament.  Coach pointed out God is a God of wrath.

Dr. Michael Spaulding.  Modern Christianity is averse to confrontation.  We avoid it at all costs.

How did we get to this point that it’s not Christlike to fight evil.

Leftism — Not Just Wrong, But Evil

Coach read excerpts from the Leftism article linked above.

“Conservatives who believe that it is still possible to reason with the left and engage them in fair-and-square policy debates are clinging to a failed strategy, sadly. We must accept the reality that leftists have long since abandoned rational rules of engagement, if they ever had any; instead, they operate from a hate-filled mob mentality, a bloodlust for power, and a complete absence of moral boundaries. We cannot afford a lack of moral clarity about the undeclared civil war raging across the United States of America.”