Evil Men Have Crept in Unawares 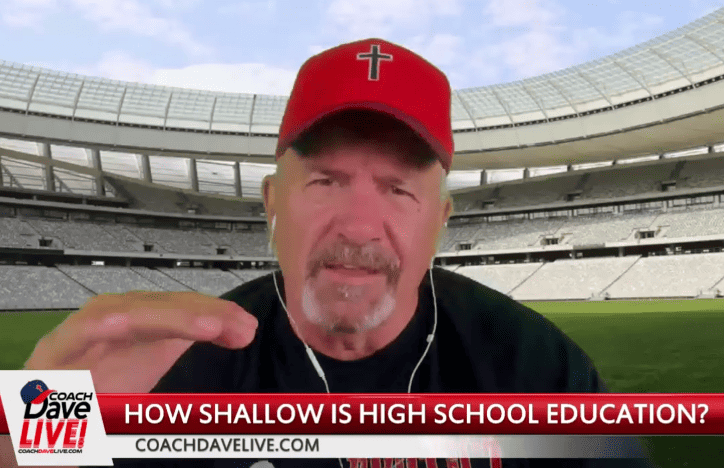 Folks on Facebook were glad to see that the Coach had been released from Facebook prison.  He was blocked by the popular social networking platform for thirty days for a “hate speech” violation.  His account became live again yesterday.

Coach announced that he is going to be in New York City this weekend for the Hear the Watchmen event.

Public education is shallow.  The Church is also shallow.  The Pastor is forced by the “dumbed down” quality of the people who are in the pews to dumb down what he presents from the pulpit.

We wouldn’t laugh so much about tin foil stuff if we appreciated how very real evil is in the world.

Coach asked, “Can the average person in church quote from memory the first ten amendments of the bill or rights?”  Why are we Christians so willing to stay in the third grade of knowledge.

Coach googled “MK ULTRA” to prove the point that tin foil hat stuff is real.  A story on the History Channel appeared on page one.

Coach has been studying the John F. Kennedy assassination.  This was a pivotal event in human history.

“Government is the domain of God,” said Coach.   We don’t understand what is going on because all we are presented with is information that originates with the devil.  It is Satan’s plan to destroy humanity.

Evil men have crept in unawares.  The evil is everywhere we look.

Paul from the huddle said that he saw a Tweet indicating that 60 percent of abortions are of black babies.

“Something is about to happen,” said Coach.  “They just silenced Alex Jones.  They are practicing censorship.  They are taking down the king.”

This Bible is a playbook for what is going on.  It’s more than life enhancement.  There is nothing new under the sun.  The game has never changed but the weaponry has.

Coach says that he is going through a sifting process.  If you are not educating people then he says that he may not have time to do much with you.

Most people don’t want to engage.  They just want to watch it happen.

We have hope, but not faith.  If we really had faith things would be different.

Paul, an apostle of Jesus Christ by the will of God, to the saints which are at Ephesus, and to the faithful in Christ Jesus:

2 Grace be to you, and peace, from God our Father, and from the Lord Jesus Christ.

3 Blessed be the God and Father of our Lord Jesus Christ, who hath blessed us with all spiritual blessings in heavenly places in Christ:

4 According as he hath chosen us in him before the foundation of the world, that we should be holy and without blame before him in love:

5 Having predestinated us unto the adoption of children by Jesus Christ to himself, according to the good pleasure of his will,

6 To the praise of the glory of his grace, wherein he hath made us accepted in the beloved.

7 In whom we have redemption through his blood, the forgiveness of sins, according to the riches of his grace;

8 Wherein he hath abounded toward us in all wisdom and prudence;

9 Having made known unto us the mystery of his will, according to his good pleasure which he hath purposed in himself:

10 That in the dispensation of the fulness of times he might gather together in one all things in Christ, both which are in heaven, and which are on earth; even in him:

11 In whom also we have obtained an inheritance, being predestinated according to the purpose of him who worketh all things after the counsel of his own will:

12 That we should be to the praise of his glory, who first trusted in Christ.

13 In whom ye also trusted, after that ye heard the word of truth, the gospel of your salvation: in whom also after that ye believed, ye were sealed with that holy Spirit of promise,

14 Which is the earnest of our inheritance until the redemption of the purchased possession, unto the praise of his glory.

15 Wherefore I also, after I heard of your faith in the Lord Jesus, and love unto all the saints,

16 Cease not to give thanks for you, making mention of you in my prayers;

17 That the God of our Lord Jesus Christ, the Father of glory, may give unto you the spirit of wisdom and revelation in the knowledge of him:

18 The eyes of your understanding being enlightened; that ye may know what is the hope of his calling, and what the riches of the glory of his inheritance in the saints,

19 And what is the exceeding greatness of his power to us-ward who believe, according to the working of his mighty power,

20 Which he wrought in Christ, when he raised him from the dead, and set him at his own right hand in the heavenly places,

21 Far above all principality, and power, and might, and dominion, and every name that is named, not only in this world, but also in that which is to come:

22 And hath put all things under his feet, and gave him to be the head over all things to the church,

23 Which is his body, the fulness of him that filleth all in all.

God cannot work through us if we don’t get what is going on.  Coach talked about how he and Michelle are one.  They have unique duties as partners.  We are partners with God.

Coach said, “You have a starring role in this movie called life.”

Coach quoted a man in New Zealand who just wrote to him about a men’s retreat in New Zealand.  They have started a Salt and Light Brigade there.

Coach brought up the Candace Owens issue.  He played a video of Candace being harassed at a coffee shop.  It is from the Hannity show on FoxNews.

Coach played a video that was done at Columbia University.  The host of the video asked students to name the five freedoms mentioned in the First Amendment.  Most students could not name even one.

Coach asked how this happened.  He said this is evidence of how the God haters have succeeded in taking away our Christian heritage.

There is one set of beliefs that is intent on conquering the world and one that is focused on getting out of here.

Coach introduced his viewers to the Montauk Project.  There is a boat trip to Montauk as part of the “Hear the Watchmen” conference.

There is something spiritual going on around us that the church has no interest in understanding.

Why does the church have no intellectual curiosity?

This is bigger than we understand.  “In the desire to silence Alex Jones there exists the promise of exposure.  It is about to happen.”  Said Coach.

10 His watchmen are blind: they are all ignorant, they are all dumb dogs, they cannot bark; sleeping, lying down, loving to slumber.

11 Yea, they are greedy dogs which can never have enough, and they are shepherds that cannot understand: they all look to their own way, every one for his gain, from his quarter.

12 Come ye, say they, I will fetch wine, and we will fill ourselves with strong drink; and to morrow shall be as this day, and much more abundant.

Roger pointed out that the control and conformity is most visible inside the church.

Coach observed that, “The Church is just as controlled as the public schools are.”

Coach asked, “If God created everything doesn’t it make sense that Satan would want to destroy everything.”

20 I am crucified with Christ: nevertheless I live; yet not I, but Christ liveth in me: and the life which I now live in the flesh I live by the faith of the Son of God, who loved me, and gave himself for me.

21 I do not frustrate the grace of God: for if righteousness come by the law, then Christ is dead in vain.