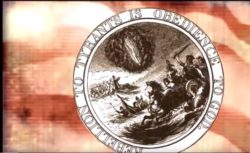 Webster’s 1828 Dictionary – formalist – one who observes forms, or practices external ceremonies. One who regards appearances only, or observes the forms of worship, without possessing the life and spirit of religion, a hypocrite. A form of godliness but deny the power thereof.

God, the heavenly Father, loves and disciplines those He loves. He is capable of giving a pretty good spanking. We have become formalists. A form of God denying the power thereof.

The heroes of the faith waxed valiant in fight, turned to flight the armies of the aliens. Some had cruel mockings and scourgings, were imprisoned, stoned, sawn asunder, tempted, were slain with the sword, they wandered about in sheepskins and goatskins, being destitute, afflicted, tormented.

What about obtaining their best life now?

“Churches that fail to form in their members the moral character that would make such integrity and bravery possible, are not really preparing them to be soldiers, in the Just War tradition, but to be uncritical nationalists and militarists instead. Or passivists.” Lowell Morrison