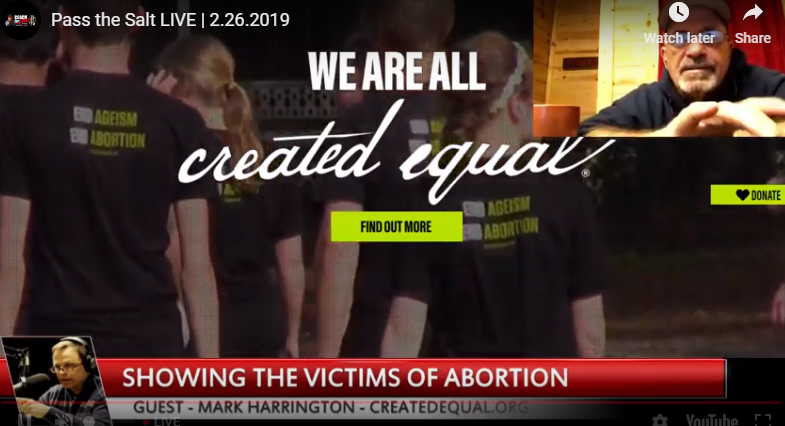 In this morning’s inspiring Coach Dave LIVE episode the Coach joined the show from a vacation cabin where he’s spending time with his family.  Mark Harrington from Created Equal is today’s guest.  Mark helped Coach get started in ministry 18 years ago.  Mark has always been there to help Coach along the way.

Mark takes jumbotrons to college campuses to witness against abortion.

Today’s show is about Heartbeat bills.  Coach pointed out that the Left is incrementally moving their agenda forward.  Coach and Mark are being criticized by abolitionists for using incrementalism to stop abortion.

The heartbeat bills make abortion illegal after the heartbeat appears.  In other words you can’t kill a baby who has a heartbeat.  Mark pointed out that many babies have been saved by incremental changes in the law.  We have to use the tools we have to do what we can.

Coach pointed out that the Left is fighting Heartbeat bills tooth and nail.

Mark likes to use the word prudence instead of incrementalism.  These laws put a fence around evil.  The civil government is supposed to build fences or barriers to contain evil.  Heartbeat laws are prudent.

Mark pointed out that Trump has given us a pro life window on the Supreme Court.  There is a chance that many pro life Justices will end up on the Court.

Mark believes that the Ohio heartbeat bill is being fast tracked.

A baby’s heartbeat is detectable at five or six weeks.  Once the heartbeat is detectable the abortion will be illegal.  It could save 10,000 babies could be saved in Ohio every year.  Mark pointed out that laws guide people with respect to morality.  People think that when things are illegal they think of them as immoral.  This will help them avoid the action.

Mark’s critics use this verse to claim that his position is unrighteous because a heartbeat bill allows for some abortions.  Mark argues that he isn’t the one that made the law that allows for abortion.  He is trying to fence in the evil.

Coach asked Mark to defend the use of victim images.  Mark said that it is a personal thing.  When he stands with the victim image he suffers with the victim.  It is a way of sharing their burden.  Mark also pointed out that everyone uses images to persuade.  They work everywhere else why not on abortion.   Mark pointed out that we want to be nicer than Jesus.  This is a way to get them to think.

Coach invited Mark to talk about the Justice Rides that he organizes.  Mark is raising up a group of fighters.  He has a Justice Ride coming up right away.  Mark is handing the fight on to the next generation.

Coach invited Austin to give his testimony.  He went on a Justice Ride.  He now works for Mark.  Austin has a political science degree.  He believes that the abortion fight in more important than a political career.

Mark ended his stay on Coach Dave Live with a scripture verse.

He who is not against you is for you.  This was Mark’s parting thought.  He is headed for the state house to fight for the heartbeat bill.  He predicted that the bill will pass, but anything can happen.

For talking points Mark recommended the FAQs on the Created Equal website.

Chad criticized the pro life movement for doing it for the money.  Coach isn’t convinced that the national groups really want to end baby killing.  He argued there is a “pro life economy.”

Vic thinks it’s hard to stop activities that create income.  George argued that pride is motivating those who are attacking other pro life folks.  Coach said we need to be careful not to call other pro lifers enemies.  They aren’t enemies.

Coach argues that we can have an impact on abortion and sexual deviance.  But we must fight.  Do what you can do where you can do it.

Coach showed a short video of an abortionist.

He is smug about it because he knows there is nothing good people can do about it.

Why are pastors missing it so bad.  Every church in America should have been involved with the Day of Mourning.  Coach said, “Did you ask him to mention it?”

When people are inspired by Satan they should be rebuked, according to one of the members of huddle who commented.

Coach warned folks not to just believe every youtube you watch.  He said that he is going to rely on the Holy Spirit to guide him into all truth.  He urged great care in thinking too deeply about conspiracy theories.  Coach wants to inspire folks to build a team where you live.  He wants to keep the focus on ending abortion and confronting sexual deviance.

Coach urged folks to pay attention to the source of the information.

He praised Mark Harrington for his strategy of standing with the victims.