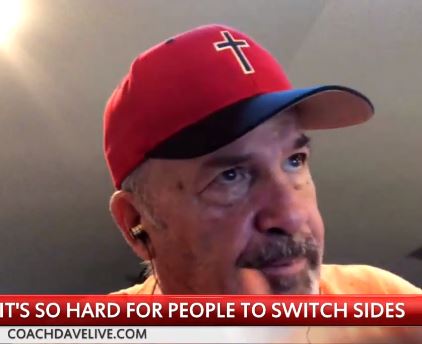 Disaster Relief: Today’s show is from the Panhandle of Florida, where we’re helping people get back to normal. It’s a month out from the hurricane, and it still looks like a war zone here.  We are doing what we can. The Body of Christ has unused talent. We need to identify our gifts and use them. I salute the guys who came to Florida to use their gifts and talents. Thank you. If you can come down, please do. Contact me at coach@coachdavelive.com.
Election: The cities are BLUE (city values). The countryside is RED (country values). Also, it’s hard for people to switch sides. If they’ve always voted Democrat it’s hard to vote Republican, and vice versa. Plus, sixty Republicans did not run for re-election. That helped the Dems.
Republicans did take US Senate seats. The House did go blue, but not a big blue wave.
But a purging is coming. FISA Report will be coming, and those Democrat crooks will have to resign their US House seats. Special elections will need to be held, and Republicans will then win the US House of Representatives. Trump could have released the FISA Report before the election, but the Democrats would have cried foul; accusing Trump of being political. But now, he can release these reports. I predict that finally, we are going to reclaim power that we’ve lost.
Our Republic is designed to protect minority rights. With Democrats leading the House, they can de-fund anything they want, so that’s where a Constitutional crisis may take place. Through redistricting, the Democrats can keep winning the US House of Representatives every two years. They want convicted criminals and illegals to vote.
But the judicial system is being restored, thankfully.
We work, pray and trust God with our future.
Keep passing the salt!
Contact Coach at: coach@coachdavelive.com
Support Coach and Pass the Salt Ministries at:
https://www.patreon.com/coachdavelive
https://coachdavelive.com/donate