Noah: The Obedience of Faith 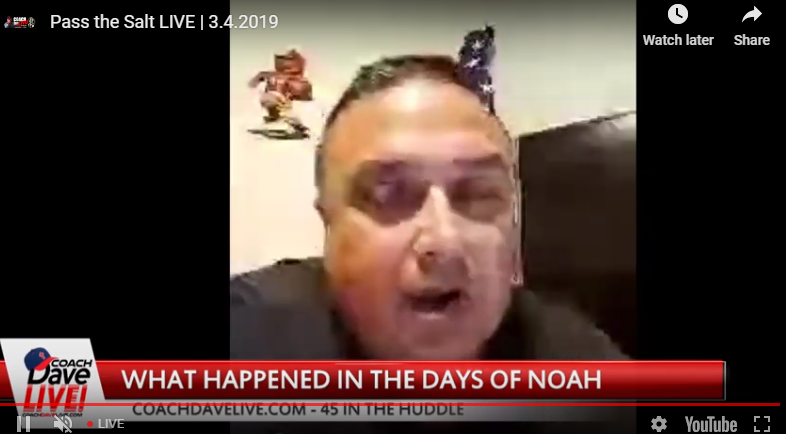 Coach opened Monday’s show.  This is the day when he gets all the stuff that has built up in him over the weekend out to the peeps.

Coach was in Allentown PA this past weekend.  Had a great time.  Got four inches of snow on Saturday.

Coach is headed to Wisconsin this weekend.

Ray reported that the event is coming together well.  Rob Pue has been busy doing interviews and organizing the event.  The Facebook page got 346000 hits in the past 28 days.  There’s a lot of interest.

Coach told a story about meeting a stranger in Allentown this weekend in the hotel lobby.  Turns out the guy was from Marshfield Wisconsin.  Coach removed his Truth not Hate Tshirt and gave it to him and told him to come to the event.

Coach urged people to come to the Lancaster, Ohio Huddle.

Then he turned his attention to the Hear the Watchmen event.

Then the Occupy Conference.  There’s a special for the next ten days.  Coach is going to draw five free rooms on the 15th.  Five people will get a free hotel room.

OCCUPY ‘TIL I COME (Equipping the Saints) @ Canton, OH

Coach thanked everyone for sharing the live video he recorded in Senator Brown’s office last week.

A new man in the Huddle brought up Isaiah 60.

Coach turned the huddle to Genesis 6.

Coach talked about being at future conference.  He mentioned interviewing Doc Marquis.  He grew up in the Illuminati.  Doc told Coach that the devil has a team.  Coach interviewed Doug Hamp.  He read Genesis 6 to Coach.  As it was in the days of Noah …

Coach never imagined what was going on in the days of Noah.  He took his shirt off and dove in.

Coach read down through Genesis 6.  There are many folks around us who aren’t walking with God.  Noah was the most counter cultural man in all of history.  He took 120 years to build the Ark.  It didn’t rain for 120 years.  Imagine what Noah put up with all those years from his neighbors.  Ridicule.

During those 120 years there were times when Noah felt like he wasn’t winning.  We still need to keep fighting.  God always wins.

If you’re not walking with God then you aren’t going to be able to discern.

Modern man is messing with the DNA again.  Allan talked about the fact that fallen angels were messing with human DNA in the days of Noah.

Coach mentioned Tony Evans.  Michelle mentioned that she was listening to him yesterday.

Starting at the 15 minute mark.

Evans urged Christians to not be silent.  We must confess our faith.  Atheists are confessing their faith.  Why aren’t we?  He said that men are responsible for their families.  You can’t walk with your heavenly father and let everyone else dictate to you.  Noah condemned the world with his work and his witness.  120 years after he started building the Ark it happened.  The rain started.

Noah was given instruction without knowing how it was going to be pulled off.  He had no instructions on navigation, how to feed the animals etc.  God may not give you all the information.  But you are still called to move on in faith.

Do what God has told you to do.

Larry pointed out that the first mention of rain in the Bible is in this passage.  God told Noah it was going to rain seven days before it started.

The Bible gets specific about the animals who were put in the Ark.

George talked about the American debt making us into a banana republic.  Something is happening here.  Coach said it’s starting to rain.  Dale commented that he believes in global warming.  The closer the SON gets to the earth the hotter it gets!  Keep your face as flint before the world.  Stay strong in Jesus.

Coach talked about weakening relationships.  He thinks about those relationships in terms of, “You don’t know what I know.”  He thinks he sees things that maybe others don’t see.  They operate only on what they see and hear with their natural eyes and ears.

Coach is losing associates because they aren’t walking with me.  He said he’s not questioning their walk with God.  He’s just saying that they are choosing to NOT walk with him.

God is taking him on a path that other Christians are not on.

Coach talked about the Road to Emmaus and how the disciples are walking along dejected and someone shows up to walk beside them.  It was Jesus.

Mark Trump observed that Jesus taught the disciples about himself by talking about the Old Testament.

George talked about the rapture being false doctrine.  Coach suggested we have a bad understanding of it.  The rapture goes against Biblical truth.  Many have been taught differently.  Coach said we have to extend grace.  He said it’s not a salvation issue.

Coach played a video from Larry on refugee resettlement.

US Taxpayers are paying the bill for their own destruction.

Christians don’t fear muslims because we don’t fear Christ.  Our constitution is being used against us.