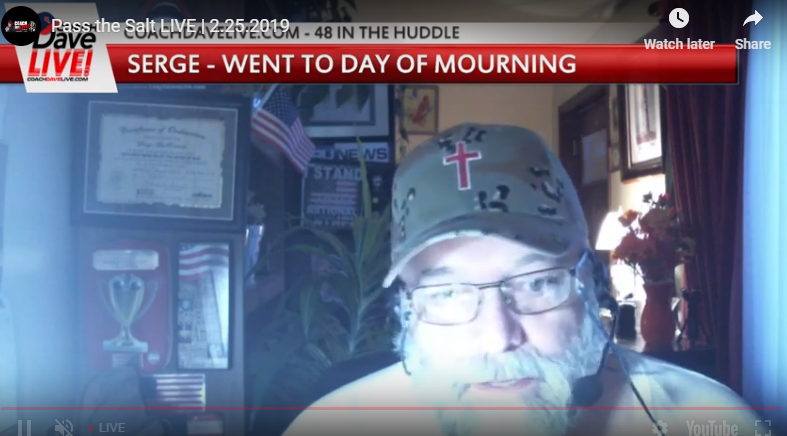 Coach led the show from a cabin in the middle of nowhere.  No internet in the cabin.  He figured it out using mobile data.  He is with his family, including the grandchildren.

He went over the upcoming events.  A huddle is planned for Allentown, Pennsylvania this coming Friday.

Coach touched on the Day of Mourning that took place on Saturday.

Serge reported on attending the National Day of Mourning near where he lives.  He was not able to get any pastors to join him.  He reported that about 40 pastors got up when Elizabeth invited pastors to stand and be recognized.  An overflow room has to be opened.  Thousands of people attended.  Serge said that a tremendous wave of mourning moved through the crowd that included weeping and repentance.  Bobby was in the overflow room.  He said that there were at least one thousand in the overflow room.

Coach talked about how in a football game he always has the first ten plays scripted.  They are the plays they are going to run no matter what.  The goal is to break all the enemies tendencies.  Coach asked, “What is the next play?” after the Day of Mourning.  He said until we know what our next play is before we run the current play we will continue to lose.

Christians are opposition without action.  We must stop using the word “Abortion.”  It’s meaningless.  We must call it infanticide.  The Left has made the issue infanticide.

Coach talked about the dedication of one of his grandchildren in the church his daughter attends.  The pastor gave Coach the microphone.  He turned to Psalm 127.

Unless the Lord builds the house, we labor in vain.  If the Lord is not the head of our home it is vain to pray to God.

Coach told the young people in the congregation to have children.

Lo, children are an heritage of the LORD: and the fruit of the womb is his reward.  You reward God with children when you have them.  This is why Satan is at war with children.

As arrows are in the hand of a mighty man; so are children of the youth.

Happy is the man that hath his quiver full of them: they shall not be ashamed, but they shall speak with the enemies in the gate.

Shame on you for not rewarding your parents with grandbabies.  Coach spoke this to the young couples in the congregation.  The devil wants to kill the kids.  Children are God’s arrows that He wants to shoot for His purposes.

Coach and Michelle went to the Day of Mourning event near his home.  No pastors were there.  Where are they?

Paul Webb reported on bringing the truth to one of their churches this weekend.

Coach talked about Glen.  Coach said, “God bless Glen.”  He took the victim signs to Robert Jeffries church in downtown Dallas.  The show featured a video of the event.

Who is the real enemy in this battle?  Coach asked.  Coach is for any measure that saves babies.  Why will pastors not fight to end abortion?  The number one excuse is that we can’t win.  It is a waste of time.  If the Heartbeat bill is passed and makes it to the Supreme Court and the Court says that it is a state issue that will be a victory.

Coach played a video statement by an Abolitionist who was critical of pro life leadership that has been laboring for years.  Pro lifeism is the enemy of Abolitionism, according to the spokesman in the video.  George Lewis observed that we’ve turned the pro life movement into a denomination.  The pro life movement has pretended that the Supreme Court makes laws.  Abolitionist is a new movement.  They are wrong to be critical of the men and women who have been in the trenches for many years.

Coach used a football analogy.  Keep moving those stakes down the fields.  Incrementalism.

George talked about not accepting any label other than being a Christian.

Coach showed a Facebook picture of John Brockhoeft.  He is an abolitionist. He spent 11 years in jail.  Coach observed that he doesn’t have the courage to do what needs to be done.  There is hypocrisy everywhere you look.  Dale Socia said it isn’t about prolifeism or abolitionism.  It is about the Cross of Christ.

Abolitionists hate Mark Harrington, even though we are on the same team.  He is vilified and ridiculed and hated by the abolitionists.  They claim he is in it for the money.  He is hated by everyone.

Coach played a Created Equal video of the jumbotron outreach that he leads on college campuses.

George observed that man made labels always get corrupted.  We need to be about our Father’s business.

Johnny Brockhoeft, being arrested for burning down babykilling abortion clinics. What a great nephew! Johnny saved a lot of babies.