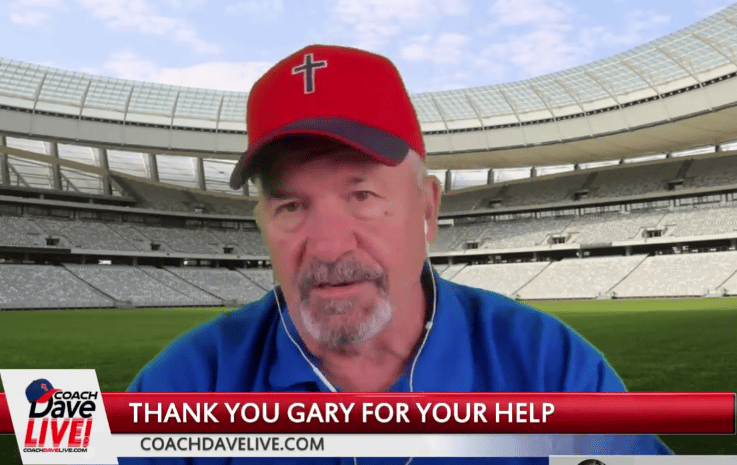 Coach, just returning from a conference in New York, stepped into dog poop as he went to brush his teeth.  And then he lost the material on the computer that he had prepared for the show today.  The week is off to an interesting start for Coach Dave Live.

Coach praised Gary Pierce for his help with the conference this weekend and he mentioned the need to publicize his travel schedule.  Said that it would be available on coachdavelive.com soon.

Coach announced a trip to Texas coming up September 14 and 15.  He also talked about a trip to Wisconsin beginning on the 17th of October and extending through the weekend.

Details can be found at www.coachdavelive.com

“My greatest heartache is not being able to bring people together who want to go to the streets,” said the Coach.

Coach said, “I don’t believe in a pretribulation rapture.”

“The church is the body of Christ, not the bride.” Coach declared.

George talked about a pro-life witness he participated in at a Southern Baptist Church on Sunday.  The church called the police on them.  Eventually a pastor came out and objected on the basis of the fact that a member of the church recently died.  George googled his obituary when he got home.  He was a 32nd degree Mason.

Coach said that we all have our own theologies.  Why do we have to agree with it for it to be true.

Coach played a video by John Ramirez a former Satanic Cult High Priest.  He had powers, drank blood and did astral projection.  He was hired to cast spells.

Coach played a Facebook video that he made at the conference in New York.  It was of John Ramirez casting a demon out of a woman.

“If you were to cast out a demon, what would it look like?” Asked the Coach.